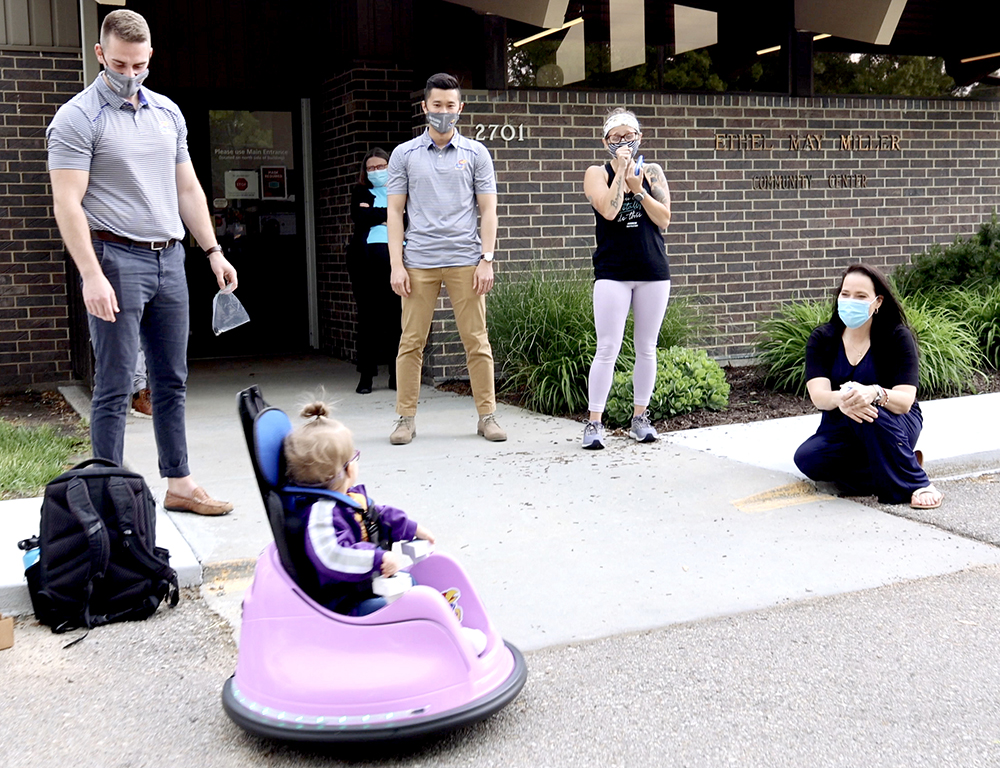 LAWRENCE — The first two years of life have been challenging for Amira Payne and her family. The Topeka toddler has severe scoliosis and a condition known as Smith-Magenis syndrome, which delayed her development and left her with low muscle tone, making it difficult to stand and walk.

So when a group of engineering students at the University of Kansas spent their senior year designing and building renovations to a toddler bumper car with special features to help Amira move around on her own, her mother was overwhelmed. 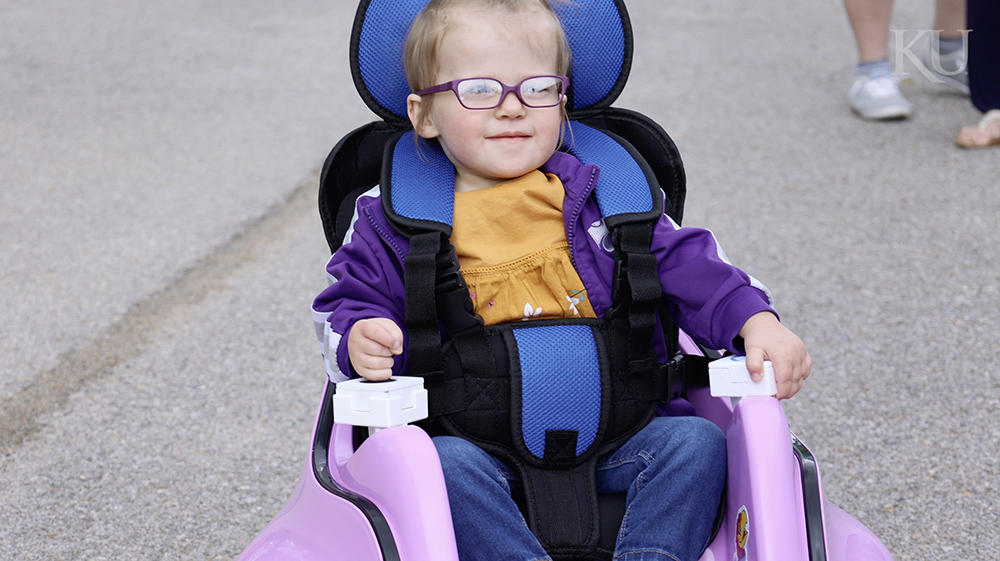 “All the emotions,” Peggy Payne said in May, after the students presented the new device to Amira. “Excited for her, that she literally gets to zoom through everything now. Sad that she has to go through all these steps, but also so happy that she has all these people that are rooting for her.”

Payne added: “It really is life-changing, for her and for us.”

It made a big impact, as well, on the engineering students who worked on the project.

“As mechanical engineering students, you’re often solving or dealing with inanimate objects — we’re just punching numbers into a calculator. That can create some disconnect from reality,” said Mike Park, a graduating senior from Wichita who helped lead the project. “Seeing Amira in real life and her current device changed our perspective on the project. It gave us the revelation that our work will impact this girl’s life.”

The journey to creating Amira’s new bumper car started in October 2020, when KU was connected to the Payne family through TARC, a Shawnee County nonprofit agency that provides services to children with intellectual disabilities. The agency responded to an email call for suggested projects from Ken Fischer, bioengineering program director, professor of mechanical engineering, and the director of KU’s Biomechanical and Rehabilitation Engineering Advancement in Kansas (BREAK) program.

BREAK gives engineering students the opportunity, as part of their senior-year capstone project, to create customized design services to individuals with disabilities.

“It seemed like the perfect marrying of our mission and their mission as a school, to create a situation that legitimately will change Amira’s life,” said Alisha Delgado, a speech-language pathologist for the infant-toddler program at TARC.

Park was part of a four-person team that worked on Amira’s project. They were faced with one unusual challenge — pandemic precautions limited the direct visits they could conduct with Amira and her family. “They were having to overcome some of those remote difficulties,” Fischer said.

In the end, the students took an off-the-shelf motorized toddler bumper car — the kind that can be bought easily at any big retail store — and then went to work rebuilding it, installing a new car seat and head support, as well as padding for her feet. They replaced the hollow plastic wheels with rubber wheels for durability. To make it like a power wheelchair, they installed one multidirectional joystick to operate the vehicle — it originally came with two sticks that independently operated motors at each wheel.

“We improved every aspect of this device to make it more durable, safer and better able to fit her needs,” Park said.

“They’ve been amazing at asking super-deep thoughtful questions, and are always responding with ‘How can we make this better for Amira?’” Delgado said of the engineering students.

The resulting creation was a hit with Amira, who received her new device in May.

“I think today, what we saw was nothing but joy in her face,” said Delgado, who called the moment “one of the highlights of my career.” The bumper car, she said, will help Amira’s development — not just in moving around, but also cognitively, since she’ll have more freedom to explore and engage the world around her.

Fischer hopes the project will influence the careers of the students who worked on it.

“I think that this program in general — especially these highly successful projects where they know and see they have an impact — helps them see how they can use their engineering degree to help others,” Fischer said. “I’m hopeful these students will continue to use them to help people with needs like this.”

BREAK originated in 2012 with funding from the National Science Foundation. That funding expired in 2018, but the program has been sustained by KU since then. Fischer is seeking new outside funding to continue the effort.

“It’s the School of Engineering that’s allowing us to continue these projects,” Fischer said. “Engineering is investing in Kansas and in Kansans, but also in giving our students real-world experiences that have an impact.”

It certainly has made an impact on Amira and her family.

“Something happens with Amira and she shows us that she’s not going to allow her syndrome to write her story,” Peggy Payne said. “She’s going to overcome it and she’s going to be her own person. She is very sassy and lets us know.”