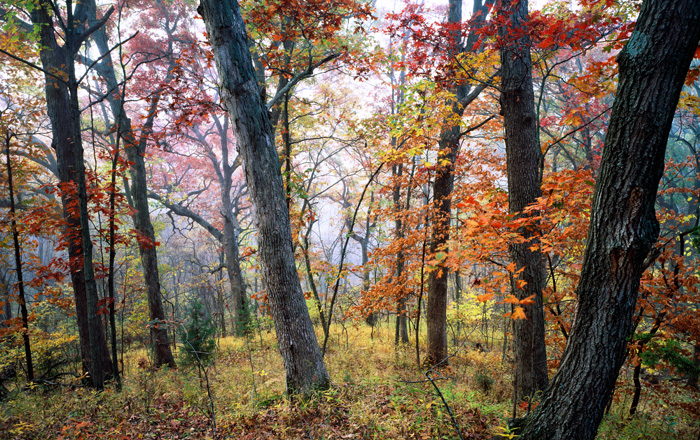 LAWRENCE — Through cooperation of a group of organizations and individuals, the Baldwin Woods Forest Preserve — a part of the University of Kansas Field Station and a jewel of biodiversity in Douglas County — has grown from 202 acres to 456 acres and is now unified as one contiguous tract. The protection of the additional land was announced April 30 at a dedication event at Vinland, near the preserve.

A portion of the new property becomes the first Forest Legacy Program project in Kansas. 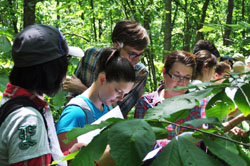 “We’re so pleased to see the Forest Preserve expanded and unified,” said Ed Martinko, director of the Kansas Biological Survey, which manages the KU Field Station. “The area is recognized nationally as important for research, and we’re grateful to all those who helped make this project happen.”

Lands for the expansion were offered for sale below market value by landowners Ray Wilber and Cathy Dwigans, and John and Gloria Hood, of rural Baldwin City, for the purpose of incorporating them into the Forest Preserve.

In addition to the protection of these lands, the landowners have created an endowed fund at KU Endowment to support natural resource management and research on the Forest Preserve. The goal is to increase the fund through additional contributions to KU Endowment from supporters of Baldwin Woods.

The greater Baldwin Woods, named a National Natural Landmark in 1980 by the U.S. Secretary of the Interior, is recognized as a site of environmental significance. It lies within an ecotone, the border region where the North American eastern deciduous forest meets the tallgrass prairie. Thus, many species are living at the western extremes of their geographic ranges, and subtle shifts in climate may affect their populations here to a greater extent than farther east. This makes the Baldwin Woods Forest Preserve — one of the highest-quality protected stands of the eastern forest in Kansas — extremely valuable to the study of ecosystem dynamics and climate change.

The U.S. Forest Service’s Forest Legacy Program, which is funded by Congress through the Land and Water Conservation Fund, is a voluntary program, administered in Kansas by the Kansas Forest Service. It protects working forests that provide public benefits.

Organizations involved in the effort to expand the Baldwin Woods Forest Preserve and their respective roles in the project area as follows:

● The U.S. Forest Service, and the Kansas Forest Service at Kansas State University, which designated a portion of the area as the first Legacy Forest in Kansas through the Forest Legacy Program, and which also provided funding;
● The Conservation Fund, a national environmental organization that works to develop conservation solutions that also meet economic needs, which worked in partnership with the U.S. Fish and Wildlife Service on a unique mitigation package to provide funding;
● The U.S. Fish and Wildlife Service, which provided access to mitigation funds from Enbridge Pipelines LLC and TransCanada Keystone Pipeline, LP;
● The Douglas County Heritage Conservation Council, which provided a grant;
● The Kansas Land Trust, which provided technical support;
● KU Endowment, the private fundraising foundation for KU; KU Endowment holds the majority of KU Field Station lands and manages private funds for the Field Station;
● The Kansas Biological Survey, a research center at KU that manages the 3,700-acre KU Field Station, including the Baldwin Woods area. The Biological Survey was established at KU in 1911.

In addition to the new lands, the Baldwin Woods Forest Preserve includes the Breidenthal Biological Reserve, the Rice Woodland and the Wall Woods, all acquired between 1965 and 1974, and now held by KU Endowment.

The Field Station’s core area, about 1,800 acres north of Lawrence, consists of native and managed habitats, experimental and support facilities, research sites and nature trails. It is open to academic programs across the university as a teaching and research resource. In addition to the Forest Preserve, the KU Field Station manages a 1,450-acre prairie preserve in Anderson County (owned by The Nature Conservancy). The KU Field Station was established in 1947 with the formation of the area now known as the Fitch Natural History Reservation.