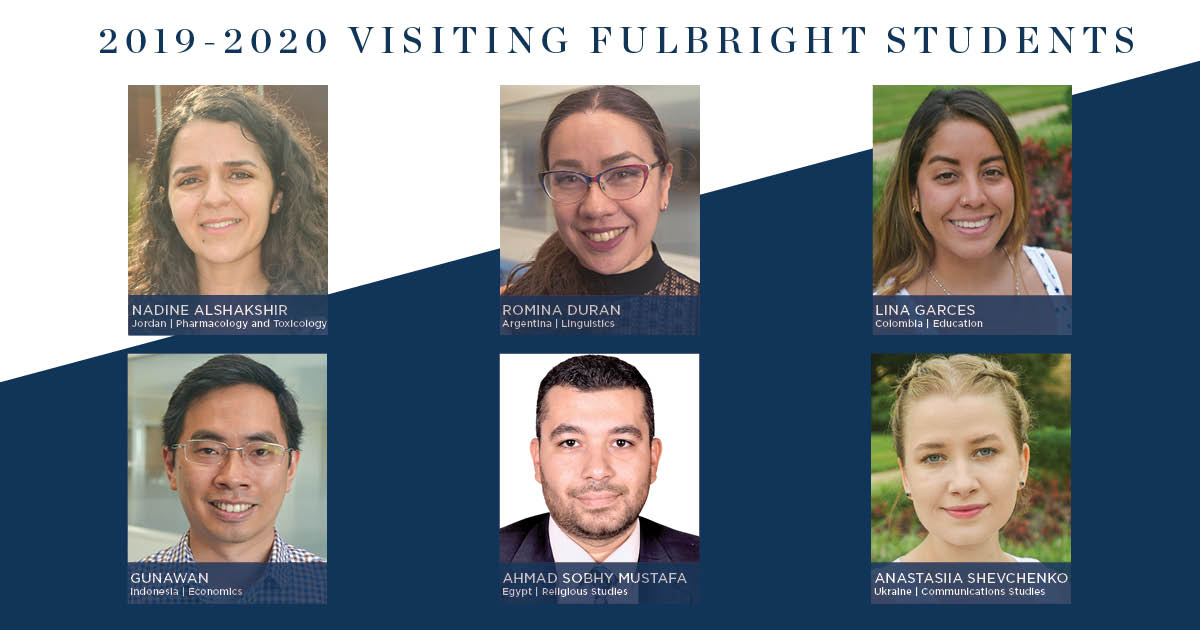 LAWRENCE — This fall, the University of Kansas welcomed six students from around the world as part of the Fulbright Foreign Student Program as well as a Fulbright Visiting Scholar from Russia.

“We are delighted by this regional diversity, which is also reflected in the destinations selected by our outbound Fulbright applicants this fall. KU’s participation in the Fulbright program is truly globe-spanning,” said Rachel Sherman Johnson, director of internationalization and partnerships at KU International Affairs.

The Fulbright Foreign Student Program enables graduate students, young professionals and artists from abroad to research and study in the United States for one year or longer at U.S. universities or other appropriate institutions.

The Fulbright Program, the flagship international educational exchange program sponsored by the U.S. government, offers over 8,000 grants each year to U.S. and foreign students, scholars, teachers, artists, scientists and professionals. It is designed to increase mutual understanding between the people of the United States and people of other countries.

Participants are chosen for their academic merit and leadership potential, and they are provided the opportunity to study, teach and conduct research, exchange ideas and contribute to finding solutions to shared international concerns. Grants are available for U.S. citizens to go abroad and for non-U.S. citizens with no U.S. permanent residence to come to the U.S.

Nadine Alshakshir, a graduate pharmacology & toxicology student from Amman, Jordan. She holds a bachelor’s degree in pharmacy from the University of Jordan. Her research focuses on neuropharmacology and the neurodegenerative disorder Alzheimer’s disease.

Romina Duran, a graduate linguistic student from San Salvador de Jujuy, Argentina. She has a bachelor’s degree in Spanish language and literature from the University of Jujuy. Her research project involves linguistic documentation of understudied indigenous languages that survive in ceremonial chants and Andean topography and, in parallel, the extent to which the Quechua dialects affected or were affected by Spanish syntax in the Argentinian province of Jujuy.

Lina Garces, a doctoral education student from Cali, Colombia. She holds bachelor’s degrees in economics and international business and economics and public policies as well as a master’s degree in social political studies from Icesi University.  Her research project is a comparative analysis between the charter school programs in the United States and Colombia’s El Programa de Ampliación de Cobertura Educativa. Specifically, she will examine the financial effectiveness of these similar programs.

Gunawan, a doctoral economics student from Yogyakarta, Indonesia. He holds bachelor’s and master’s degrees from Humboldt University of Berlin and ENSAE Paris. His research focuses on microeconomics.

Ahmad Sobhy Mustafa, a researcher and senior translator at Al-Azhar Observatory for Combating Extremism in Cairo, Egypt. He observes, analyzes and critiques reports related to extremism and Islamophobia. Mustafa holds a bachelor’s degree in Islamic studies from Al-Azhar University and is currently a graduate student there. He also holds two diplomas in Islamic studies from Cairo University and the Higher Institute for Islamic Studies. Mustafa’s research focuses on analyzing terror group discourse toward non-Arab countries.

Anastasiia Shevchenko, a graduate communications student from Kharkiv, Ukraine. She holds a bachelor’s and master’s degree in sociology from V.N. Karazin Kharkiv National University. Her research specializes in the manipulation of political communications, specifically media effects and manipulation. She will examine how entertaining elements of political discourse manipulate political consciousness and aims to discover strategies to counter manipulative influence. 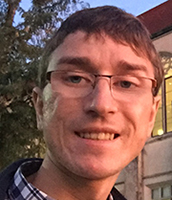 At the beginning of October, the KU Department of History welcomed Alexander Zhidchenko, a visiting Fulbright scholar from Russia. A native of Siberia, Zhidchenko holds degrees from Omsk State University and Altai State University. He is employed by the Russian Association of Women’s History Researchers in Moscow, a professional organization of several thousand scholars in the fields of history, sociology, philology and others. Zhidchenko’s research concerns popular culture and daily life in new planned cities in the 1950s and 1960s, comparing Soviet and American communities. He will remain at KU through the first half of the spring semester.