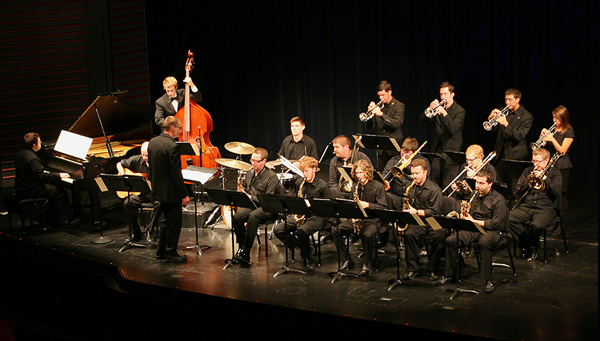 LAWRENCE – The University of Kansas Jazz Ensemble I, one of the top-rated collegiate jazz bands in the country, will travel to New York City to perform at the legendary Jazz at Lincoln Center.

Directed by Dan Gailey and featuring Kansas City-based jazz vocalist Deborah Brown, this will be the first time a KU group has performed in the world-famous concert hall.

“Jazz at Lincoln Center is one of the greatest jazz venues in the world,” said Gailey, who is director of the KU jazz studies program and professor of music. “It’s an honor to perform in it.”

In 2015, KU Jazz Ensemble I was named by DownBeat magazine as the Graduate College Winner for Best Large Jazz Ensemble, designating it as the outstanding collegiate ensemble in North America. Since Gailey became the director of the KU jazz studies program in 1992, KU ensembles or students have won 23 DownBeat Music Awards, which are among the most prestigious awards in jazz education.

The concert will be the world premiere for several pieces composed or arranged by KU faculty, current students and former students. The program will feature the work “Everybody is with Everybody Else,” an original composition by Kai Ono, an award-winning junior piano and composition major from Irvine, California.

“Our jazz studies program has some of the country’s brightest young jazz musicians. I look forward to introducing their work to a New York audience,” Gailey said. “An added bonus is collaborating with musicians as renowned as Deborah Brown.”

Brown is a frequent guest of the KU Jazz Ensemble. She sang with them at the world-famous Montreux International Jazz Festival during the group’s 11-day European tour and was a featured soloist for the group for concerts at the Kauffman Center of the Performing Arts in Kansas City, Missouri, and the Lied Center of Kansas. As a vocalist, musician, entertainer and band leader, Brown has performed in more than 50 countries and alongside other jazz greats. She has recorded 11 albums and is featured as a special guest soloist on many others.

“When instructed by great educators and professionals, students become well-rounded, as the KU Jazz Ensemble has proven to be. It’s a joyful experience performing with them,” Brown said.

Performance information for the reprise concert at the Lied Center of Kansas is available at lied.ku.edu or 785-864-2787. Admission is free. To follow the live stream, go to https://livestream.com/liedcenter.

Students performing in the concerts include: