LAWRENCE – The nationally ranked University of Kansas School of Law moot court program is off to a stellar start in the 2017-2018 season, snagging a national championship and a second-place finish. 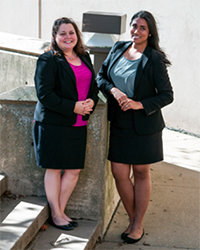 “Every round showcased how well-prepared, engaged, and knowledgeable all of the competitors and judges were, which made for a truly rewarding experience at such a well-organized competition,” Shastry said. “Participating in moot court has allowed me to develop arguments and oral advocacy skills alongside highly experienced professors and practitioners, and I’m so grateful to have access to such practical training before graduating.”

Carroll and Shastry prevailed in the final round before a distinguished three-judge panel that included Judge Timothy Dyk of the U.S. Court of Appeals for the Federal Circuit, Judge Reggie Walton of the U.S. District Court for the District of Columbia, and former U.S. Solicitor General Paul Clement. KU Law Professor Tom Stacy coached the KU team.

“Some of the practice rounds with our professors were more difficult than the final round of the competition,” Carroll joked. “But the feedback and constructive criticism provided by the faculty as guest judges and moot court coaches is invaluable. Moot court is a very practical application of law school skills, and because of moot court, I now feel much more comfortable behind a podium in front of distinguished judges.”

KU Law’s moot court program ranks 17th in the nation, according to rankings published by the University of Houston Law Center. KU Law students accumulated enough points during the 2016-2017 season to break into the top 20 for the second year in a row, rising two spots above KU Law’s No. 19 ranking for the 2015-2016 season. Moot court competitions simulate appellate court proceedings, with students submitting a written brief and presenting oral arguments to judges.