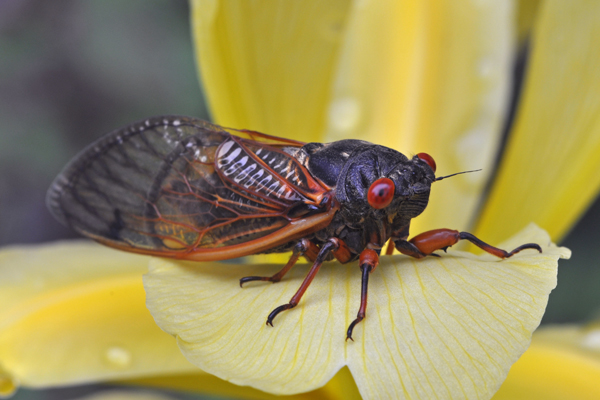 LAWRENCE — The oscillating song of the 17-year cicadas — which some people find musically magical and others find intolerable — has become the subject of spur-of-the-moment research for a group of University of Kansas scientists. And they need volunteers.

“All you need, in order to help, is a body and a smartphone. And in some cases you don’t even need the phone,” said Dan Reuman, who is leading the project. Reuman is an associate scientist at the Kansas Biological Survey and a KU associate professor of ecology and evolutionary biology.

The group of scientists, along with their postdocs and students, has been trying to measure whether and to what extent these oscillations are synchronized across a large spatial area. They have taken preliminary recordings at Clinton State Park, and results have yielded significant measurable data.

“It seems that the calls coming from a group of cicadas oscillate in volume within about a five-second period when cicada densities are high,” Reuman said.

The scientists plan to continue their effort over the next two weeks as the adult cicadas, which emerged in late May, reach the end of their song and their lives.

To take samples, participants will lay a recording device every 50 meters along a trail through the forest at Clinton State Park and record cicada calls at all locations at the same time. Sampling trips take about two hours.

Reuman said the researchers would like to know whether human-caused habitat fragmentation affects the degree of the synchronization.

“Anecdotal evidence so far seems to suggest that when a human structure is between two trees, the volume fluctuations can become synchronized,” he said. “But in continuous forest, it may be that fluctuations are synchronized over fairly large spatial scales. This would be an interesting interaction between human activities — habitat fragmentation, in the form of building houses, roads and other structures that disrupt continuous habitat — and a dominant pattern in nature.

“We’re working at the basic science level at this point and can’t currently link these studies to specific applications. But cicadas are known to be important for ecosystems when they emerge. It’s reasonable to hypothesize that human impacts on mating-related vocalizations of cicadas may have further ecological ramifications.”

After recordings are taken, Reuman’s lab group will put the recordings through wavelet analyses, a core expertise of the lab, to analyze whether the call volume fluctuations are synchronized and how this depends on distances between sampling locations and other factors.

“We don’t know where this will lead, but it has been fun so far, and we have some nice preliminary results.” Reuman said. “I am thinking of it as something fun to do that has a decent chance of resulting in publishable science. And it certainly is interesting.”

Search options »
Subscribe to KU Today
KU in the news
Bloomberg — Mon, 07/27/2020
New sex-and-age bias ruling signals reach of LGBT worker case
LA Review of Books — Fri, 07/24/2020
Dr. Chekhov: On Vulnerability in the Era of COVID-19
Love it or hate it, the #ElectoralCollege remains the method used for picking our national leader. What do we not u… https://t.co/vCz1os0v5E
«»
Follow us on Twitter »
Why KU
Apply »
One of 34 U.S. public institutions in the prestigious Association of American Universities
44 nationally ranked graduate programs.
—U.S. News & World Report
Top 50 nationwide for size of library collection.
—ALA
5th nationwide for service to veterans —"Best for Vets: Colleges," Military Times