LAWRENCE — Papers by two University of Kansas engineering students ranked among the top entries in a worldwide competition hosted this spring by the Massachusetts Institute of Technology. 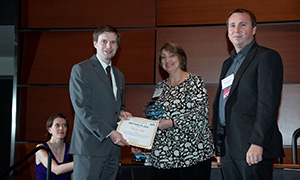 The two were recognized during the 2019 IEEE Radar Conference, held in April at Boston by the Institute of Electrical and Electronics Engineers (IEEE), which is the largest technical society in the world. Their papers were featured out of 125 student entries overall, submitted by radar researchers from around the world. 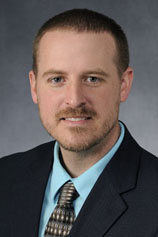 "That particular conference is the flagship conference globally — it's the one everyone wants their students doing well in,” said Shannon Blunt, professor of electrical engineering & computer science. “It's an extremely competitive process that really highlights the good work our students are doing.”

To be eligible for entry, the winning students had to be the lead authors on the submitted paper and must have done the majority of the work described in the paper. The papers were judged on whether they offered a “mature, significant contribution” to radar research.

Modern radars work pretty much as they have for decades, Blunt said. They send out a signal, then interpret the signal that bounces back. Mohr’s paper examined the possibility of tinkering with that signal — the “waveform” — to produce a better picture of what the radar is “seeing” when the signal bounces back.

"It builds on some previous work we’ve been doing at KU," Blunt said of Mohr’s research. "It really opens the door to whole new operating modes for radar." 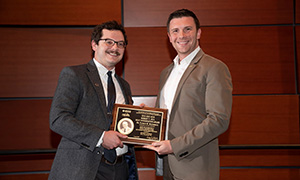 Ravenscroft’s paper, meanwhile, considered how to use radar effectively in a world where the airwaves are increasingly congested by telecommunication uses like cellular phones. Ravenscroft already plans to publish a follow-up paper this fall.

In addition to Mohr and Ravenscroft, Patrick McCormick, an Olathe native who graduated in May 2018 with a doctorate in electrical engineering, was honored at the conference with the Robert T. Hill Best Dissertation Award. He had won first- and third-place finishes in the student paper competition at previous IEEE Radar Conferences in 2016 and 2017. McCormick now works at the Sensors Directorate of the Air Force Research Laboratory at Wright-Patterson Air Force Base in Ohio.

Blunt said the recognition of the three students demonstrates KU’s strength in the field of radar research and development. Mohr, he said, has also accepted an offer to work for the U.S. Air Force this summer while continuing his doctoral work at KU.

“We have people coming out of the woodwork to hire our students,” Blunt said. "Our students are very highly qualified. They're doing really good work."