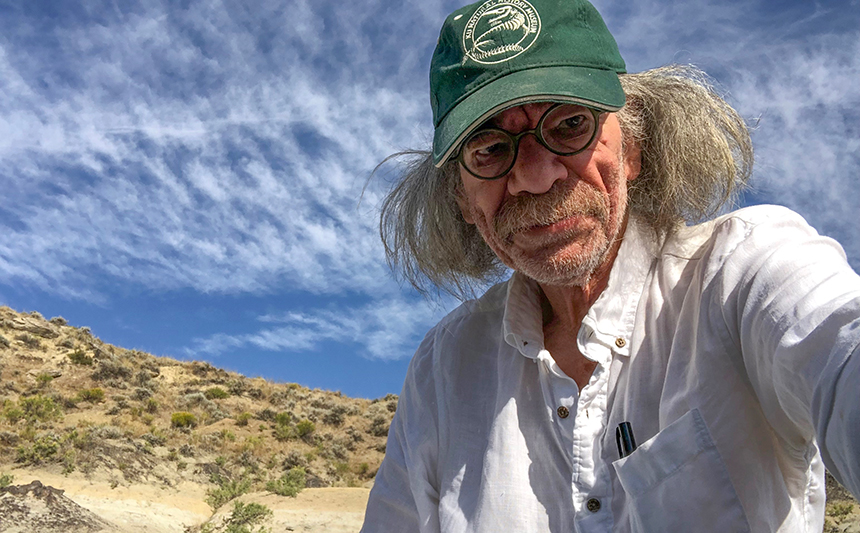 LAWRENCE – After 25 years leading the Biodiversity Institute and Natural History Museum at the University of Kansas, Leonard “Kris” Krishtalka is retiring as director at the end of this year.

An internationally distinguished paleontologist and evolutionary biologist, Krishtalka’s research has taken him around the world. But he has devoted the last quarter-century to advancing the institute’s mission of revolutionizing the study of life on our planet for the future of the environment and human well-being.

“The Biodiversity Institute and Natural History Museum have made KU a global leader in biodiversity science and education, and we did so during severe budgetary challenges without laying off staff,” said Krishtalka, who is also a professor of ecology & evolutionary biology. “All of the institute’s accomplishments spring from a brilliant and devoted team of research scientists, teachers, museum educators and exhibit staff, administrators, collection and data managers, students and board members, as well as the several thousand of friends of the museum. It’s been an honor to work with them.”

KU will soon launch an international search for a new director to oversee the institute’s 13 research divisions and 120 scientists, graduate students and staff, as well as research collections of more than 10 million specimens of animals, plants and fossils and 1.2 million archaeological artifacts. Krishtalka will continue in the role until Dec. 31.

“I am grateful for Dr. Krishtalka’s steady and enthusiastic leadership of KU’s Biodiversity Institute and Natural History Museum,” said Simon Atkinson, vice chancellor for research. “He has long championed the vital role of research in understanding the diversity of life on Earth and predicting its future in changing environments, and he has nurtured a world-class team of scientists dedicated to that cause. On top of that, thousands of people have learned more about the natural world and their place within it through museum education and outreach programs during his tenure. Dr. Krishtalka’s impact on KU is indelible.”

Inspired by Krishtalka’s leadership, an anonymous donor has committed $900,000 to endow the directorship of the Biodiversity Institute and Natural History Museum, KU Endowment announced today.

During Krishtalka’s tenure, the institute and museum have generated more than $90 million in external research funding in biodiversity and archaeological science from federal agencies and foundations, raised more than $12 million in private giving for research and education, and attracted hundreds of thousands of visitors to its public education programs, exhibits and science outreach.

Institute scientists and students have conducted hundreds of expeditions to all seven continents, discovering, documenting, describing and conserving the life and archaeological cultures of the planet. Institute scholars also launched the new field of biodiversity informatics, which uses the vast data from the institute’s biotic collections to forecast complex environmental phenomena, such as the spread of animal-borne diseases, effects of climate change on biodiversity, and conservation of rare and endangered species and habitats.

Most recently, the exterior of Dyche Hall has been restored to its original architectural splendor. As part of that project, the eight original, but severely weathered, limestone animal grotesques that have guarded Jayhawk Boulevard from the roofline of Dyche Hall since 1903 will be replaced in 2020 with new limestone replicas.

Krishtalka joined KU in 1995 from the Carnegie Museum of Natural History in Pittsburgh, where he worked as a research paleontologist and assistant director. He also served as an adjunct professor at the University of Pittsburgh and a program officer at the National Science Foundation in Washington, D.C.

His research encompassed the early evolution of modern mammals, and he has led and been part of paleontological research expeditions throughout western Canada and the U.S., Europe, Africa, China and Patagonia. He is the author of more than 200 research articles, policy papers, op-eds and popular pieces, and one book of essays, “Dinosaur Plots & Other Intrigues in Natural History.”

Krishtalka’s research has been funded by grants from the National Science Foundation, NASA, National Endowment for the Humanities, Department of Education, National Geographic Society and other agencies. He is a fellow of the American Association for the Advancement of Science and the recipient of an Award for Writing Excellence from the Council for Advancement and Support of Education.

In addition to his academic writing, Krishtalka has published two science murder-mystery novels, “The Bone Field” and “Death Spoke.” A third novel in the series, “The Camel Driver,” is forthcoming in May. His retirement plans include continuing to pursue literary opportunities as a novelist.