LAWRENCE — Mario Medina, associate professor of civil, environmental & architectural engineering, was named associate dean for academic affairs for the University of Kansas School of Engineering, effective July 1. Medina will lead the school’s academic affairs at the undergraduate and graduate levels and play a critical role in promoting and maintaining the academic excellence of the school.

“Professor Medina brings an excellent track record in the areas of recruitment, retention and curriculum development as well as diversity, equity and inclusion to the school,” said Arvin Agah, dean of engineering. “With a history of distinguished service, outstanding teaching and world-class research, he is an ideal choice to oversee the critical responsibilities of this position. I look forward to working with him as we strive to elevate the stature of KU Engineering at the national level.” 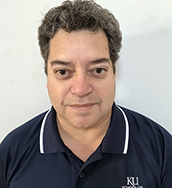 Medina joined the KU architectural engineering department in 1998. When architectural engineering merged with the Department of Civil and Environmental Engineering in 2001, Medina moved to the School of Engineering. His research focuses on developing energy-efficient building components with specialization in building enclosures. He is internationally known in the field of phase change materials integration into building components. His research has been funded by the National Science Foundation, the U.S. Department of Energy, the California Energy Commission, the Army Research Laboratory and Army Research Office, the U.S. Department of Transportation and private companies.

Medina received his doctorate in mechanical engineering from Texas A&M University in 1992. He has been the associate chair for undergraduate programs in the civil, environmental & architectural engineering department since 2014. He is the recipient of the Henry E. Gould Award for Teaching (2019) and the Bellows Scholar Award for Outstanding Achievement in Teaching and Service (2006 and 2019).