LAWRENCE – The University of Kansas is creating a new position to promote the belonging of Native American KU students and build sustainable relationships that are mutually beneficial for the university, Haskell Indian Nations University (HINU) and sovereign tribal nations in serving Native American initiatives. 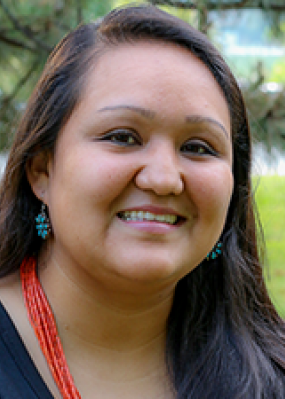 Melissa Peterson (Diné) will fill the position and begin working in the role of director of tribal relations within University Academic Support Centers (UASC) on May 17. She has advocated for access to higher education and student support since arriving at KU in 2015.

This is believed to be the first time in the history of the university that there will be a full-time position to address the needs of Native American students and strengthen ties to tribal communities. The creation of this role is part of a larger investment in diversity, equity, inclusion and belonging at KU by Barbara Bichelmeyer, provost and executive vice chancellor.

“Melissa has demonstrated a passion and commitment to supporting Native American communities throughout her career,” said Susan Klusmeier, vice provost for academic success. “The wealth of knowledge and experience she brings into this new role will help KU build relationships and engage with Haskell Indian Nations University, tribal nations and Native American organizations to foster community and support Native American student success.”

Peterson currently serves as an associate director for KU TRIO Supportive Educational Services & STEM. Outside of her position with TRIO, Peterson serves as adviser for the KU First Nations Student Association (FNSA), president of the Native Faculty and Staff Council and organizer of the KU FNSA Powwow & Indigenous Cultures Festival. She advocates for Native Americans at KU and has a strong commitment to Native people in the Lawrence community and across Indian Country.

Peterson, born and raised on the Navajo Nation, is of the T ł 'ízí lání clan (Many Goats), born for the Todích'íí'nii clan (Bitter Water). She was a member of the volleyball and women’s basketball teams from 2005-07 at Virginia Commonwealth University. Peterson holds a master’s degree in public health from KU and anticipates completing her doctorate in higher education administration from KU this year. Before working at KU, she served as head coach of the Haskell Indian Nations University volleyball team and later assisted the Diabetes Education in Tribal Schools grant at Haskell.

“I am honored to be appointed as the director of tribal relations. Many faculty, staff and students, including myself, have advocated the prioritization of Native American student support at KU,” Peterson said. “My interest in this position comes from my deep teachings as a Diné. In our teachings, the Diné word “K’é” means the feeling you have when you are deeply connected to others and understand and value your roots.

“Therefore, I hope to advance Native initiatives as it relates to student success and to begin to build that system of K’é on behalf of KU.”

Peterson will work as a needed resource for KU leadership to foster equity, inclusion and belonging for Native American students. Myltin Bighorn (Fort Peck Assiniboine and Sioux Tribes), a transfer student from HINU in KU’s health, sport & exercise sciences program and current co-chair of FNSA, commends the creation of this position as a good first step for the university.

Bichelmeyer has also invested in the establishment of a position for a Native American student support coordinator, which will report to the director of tribal relations. A search for this position will take place later this year.

“With the university’s resources and intention to support this position and its responsibilities, KU can become a leader in the nation in its recognition of Native American students’ identities, cultural representation and academic success on KU’s campus and beyond,” Peterson said. “I look forward to partnering with sovereign nations to develop important relationships that will serve the students of America’s first peoples.”