LAWRENCE — As she examines the human-animal relationship dating back thousands of years, Sandra Olsen's research received a boost from an unexpected source: Rock art in rural, remote parts of the Arabian Peninsula.

Olsen, a University of Kansas professor of museum studies, has led a research team that documented hundreds of pieces of rock art in Saudi Arabia that included depictions of ancient hunter-herders interacting with different types of animals.

"I wanted to see which animals they were hunting and approximately when the domesticated species came into the area and what breeds they were," said Olsen, who is also a senior curator of archaeology at KU's Biodiversity Institute and Natural History Museum. The figures depicted in the rock art often reveal specific species of wild animals, as well as definite breeds of cattle, horses, sheep and dogs. Other domestic animals include the goat and camel. 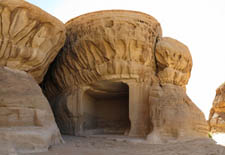 She has produced a book called "Stories in the Rocks: Exploring Saudi Arabian Rock Art" about the application of advanced imaging on hundreds of rock art depictions across Saudi Arabia, and she said her Arabian Rock Art Heritage team is still working on publishing its scholarly research.

A video about Olsen's research can be viewed here.

For Olsen's zooarchaeological research, the rock art allowed her to study the appearance and use of the horse in the Arabian Peninsula, as well as the Arabian breed itself.  Many of the images clearly depicted Arabian horses, which apparently arrived there by the first millennium B.C. 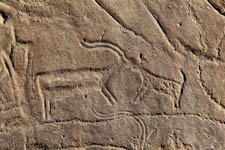 The images also made it easy for her to identify the ancient dog breed, because she could see specific physical features like coat pattern, ear shape, curled tail, etc. Its appearance is very similar to the Canaan dog, which is still prevalent in the Middle East.

Olsen recently discovered a depiction of a Scimitar horned oryx, "Oryx dammah," in a petroglyph at Bir Hima, in southwestern Saudi Arabia. It is adapted to a more steppe-like environment and must have existed there when times were more moist in the region, which is now a desert. This is the first documentation of it in Arabia. It is identified by the coat pattern, which is distinct from that of the Arabian oryx, she said. 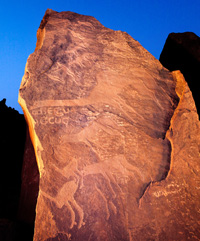 "If I had bones, which is what I normally look at, I wouldn't know any of those things, about the animals," Olsen said.

The engraved rock art also leaves clues about the nomadic people who left their record on cliff faces all over Arabia.

"The animal figures reflect the people’s diet and economy. Hunting and combat scenes reveal the types of weapons and strategies they employed. Depictions of humans illustrate such mundane but interesting personal aspects as hairstyle and types of clothing worn by women, as well as men.  When all the information is brought together, much can be gleaned about the ancient Arabian social structure and way of life,” Olsen said.

The images also shed light on the complex road system and ancient Saudi Arabia's trade connections to Egypt, other areas of the Middle East and the Far East.

"The Arabian Peninsula was not this terra incognita that it is today," Olsen said. "It was essentially the center of the world, and we can see that in many ways."

In addition to having several key routes for the frankincense trade, the peninsula was the site of cavalry clashes and fighting between local cultures and the great imperial armies of the Persians, Assyrians and Babylonians, for example.

Olsen said that for several decades the prehistory and early history of the Arabian Peninsula were poorly known. However, current archaeological research is quite active, and there are numerous international teams working all over Arabia. In the past, Western scholars led more fieldwork in Iran and Iraq, but now that those countries have became less politically stable, projects are less prevalent there.

KU's Biodiversity Institute has just established an agreement with the Saudi Commission on Tourism and Antiquity for a collaborative exchange program for researchers and students of both countries, she said. Olsen also hopes her research team can return to Saudi Arabia early in 2015.

Olsen's husband, Christopher Beard, a world-renowned paleontologist, joined the KU faculty this year as a Foundation Distinguished Professor in Ecology and Evolutionary Biology, as well as the head of paleontology in the Biodiversity Institute. His hiring is part of an initiative that represents a unique partnership between the university and state of Kansas to attract eminent faculty members to KU.

Top photo: The Nabatean culture that controlled much of the frankincense trade and built the beautiful Petra, in Jordan, also made a second capital called Hegra in NW Saudi Arabia. Known today as Mada’in Saleh, it dates to 1-74 CE.  This chamber at Hegra, with benches for seating, is known as Al Diwan, or “the court,” and probably served as a venue for sacred feasts. Photo by Richard T. Bryant.

Center photo: The site of Jubbah, in north-central Saudi Arabia, has some of the oldest rock art in Arabia, probably dating to more than 5,000 years ago.  This little scene shows a domestic hunting dog overpowering a gazelle by biting it on the muzzle, the same technique used by the African wild dog.  Photo by Richard T. Bryant.

Bottom photo: This dramatic night photograph was taken at the site of Ghowtah, in north-central Saudi Arabia.  Near the top are three pairs of warriors fighting and two oryxes. Below are a camel mother and her calf and two ostriches being tracked by a wolf. The writing is very early Arabic script known as Thamudic, dating to the first millennium BCE.  Photo by Richard T. Bryant.