LAWRENCE — Think back five years to spring 2015. People in Kansas were enjoying a rare spectacle of nature: the emergence of the Kansan brood (Brood IV) of 17-year cicadas.

In backyards, parks and forests, they saw the small cicadas and the exoskeletons left behind on trees after the nymphs crawled out of the ground to undergo metamorphosis into their winged adult stage. With luck and good timing, some people got to see the cicadas pale and tender, just after they’d come out of their shells. 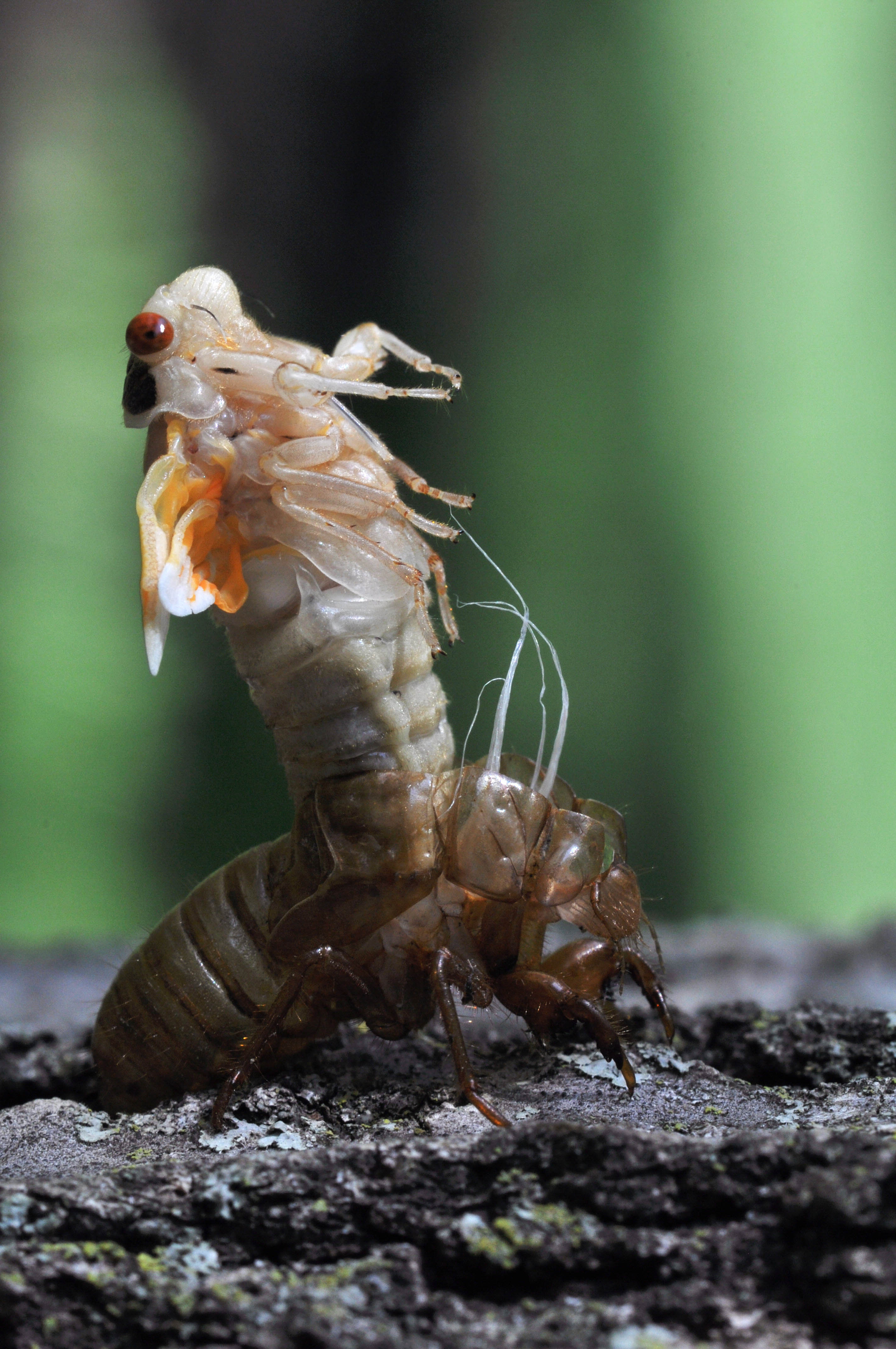 Lawrence Sheppard, a KU postdoctoral researcher from Kendal, England, took advantage of this opportunity to study the environmental factors affecting synchrony of the cicada choruses. That June, he and Brandon Mechtley (then another KU postdoc) gathered colleagues and volunteers who took recordings of the choruses, which would be the basis for the study. His findings were published this week in the journal Ecology and Evolution.

“What we found was that these self-organizing choruses were very sensitive to the local sound and light environment,” Sheppard said. “Cicada synchrony is only one of a number of self-organizing behaviors that are affected by light. Another example would be the mating behavior of moths and other nighttime insects, which is disrupted by light pollution.

“These cicadas were only subject to natural variation in daytime light level — but the synchrony we observed was also disrupted by a helicopter flyover at one point in the recordings, so they are likely to be vulnerable to noise pollution.”

Sheppard and the citizen-science volunteers, smartphones in hand, met at a trail at Clinton State Park outside Lawrence to record waves of cicada calls. The group took 20 simultaneous recordings that showed in detail how chorusing varied across the forest.

“The volunteers had a clear understanding of what to do and why it mattered,” said volunteer Bob Gent, a longtime Douglas County resident. “It was fun and informative, great to contribute to scientific understanding in some tiny way.”

To identify the limits of the cicadas’ self‐organizing behavior, Sheppard and his colleagues set up the study to quantify the synchronization between cicada choruses in different trees, and how and why this varies in space and time.

Sheppard is a member of the research lab of Dan Reuman, KU professor of ecology & evolutionary biology and a senior scientist at the Kansas Biological Survey.

“These cicadas are ecologically influential, putting a massive pulse of nutrients into the system every 17 years,” Reuman said. “They come out for mating, and the calls relate to mating, so it makes sense, ecologically, to understand how this works — in part to understand how acoustic pollution might disrupt it.” 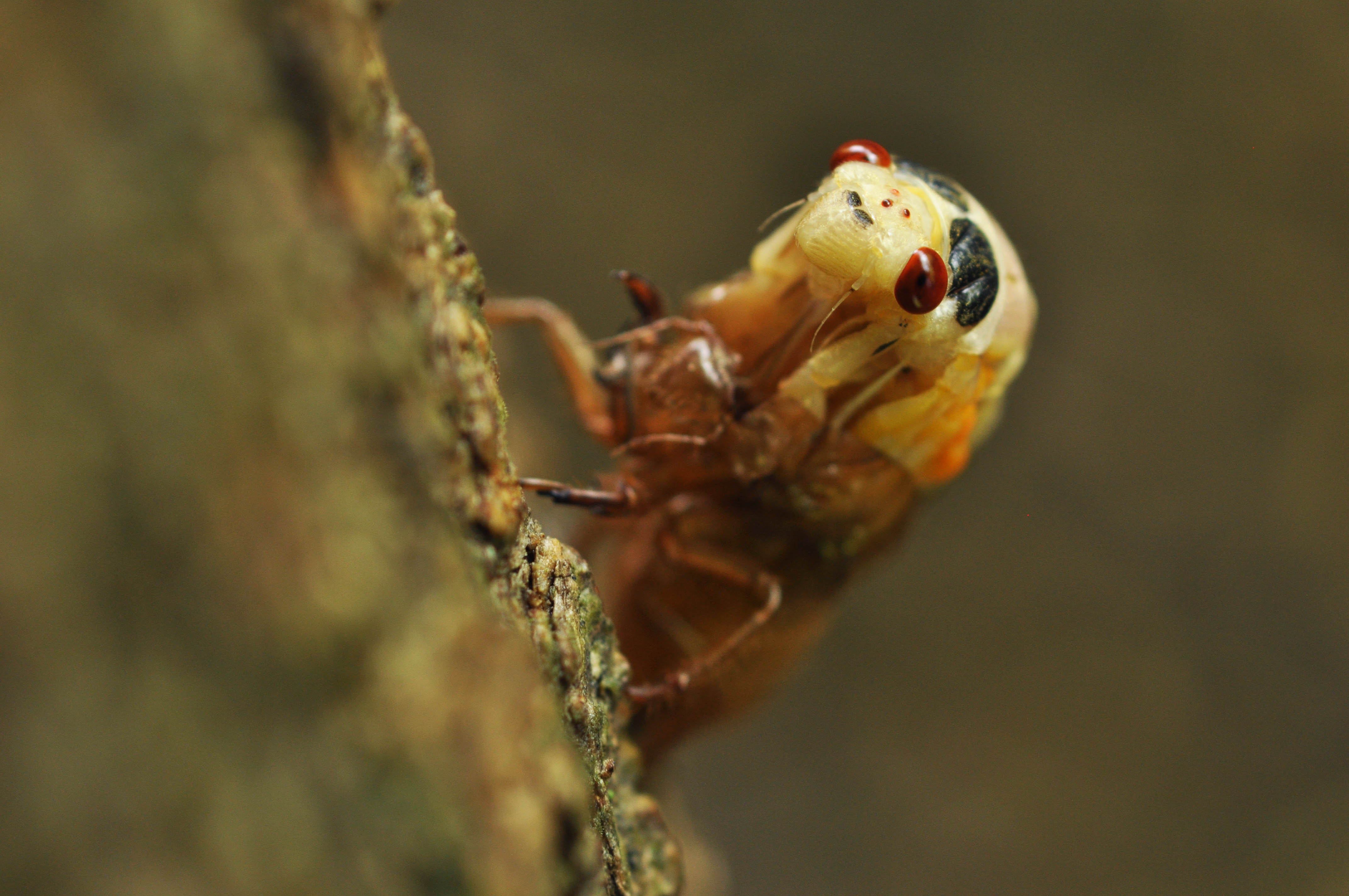 Reuman and his lab members use a combination of mathematical, statistical and computational methods — along with field and laboratory data — to study topics in animal populations and how this relates to global change ecology. A key interest is animal population dynamics and synchronized behavior, even across large distances.

“This work might seem very abstract if you’re not into math,” Reuman said, “but change in animal behavior is one of the first shifts that show up in situations like climate change. Tracking behaviors precisely in specific animal populations helps us predict what other changes might be coming — and possibly be able to make adjustments accordingly.”

“This study is a great example of how people in the community can notice something happening in their environment and get together to help do science to understand what they are seeing,” Reuman said.

Reuman, along with former KU postdocs Brandon Mechtley and Jonathan Walter, were co-authors in the study.

Scott Campbell, an aquatic ecologist and naturalist at the Biological Survey, took numerous photos of the 17-year cicadas in 2015. For more photos, see the Facebook album.

The Kansas Biological Survey was established at KU in 1911. It houses a diverse group of ecological research and remote sensing/GIS programs. The survey also manages the 3,700-acre KU Field Station, established in 1947; it offers sites for faculty and student study in the sciences, arts, humanities and professional schools.