LAWRENCE — Wesley Perkins, doctoral candidate in mathematics, has received the 2021 Bernstein Award for Future Faculty from the Center for Teaching Excellence (CTE) at the University of Kansas. The award recognizes KU graduate students who have approached their teaching as an inquiry into learning. The monetary award honors a graduate student who is pursuing a career in academia. 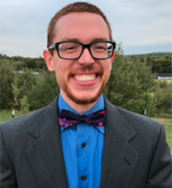 Perkins has taught college algebra, precalculus and calculus courses since 2015 as a graduate teaching assistant.

“I am passionate about investing in students and helping them succeed inside and outside of the classroom,” Perkins said.

Through his YouTube channel, he said he enjoys making technical math results approachable to general audiences.

Perkins was also a finalist for the Department of Mathematics' graduate teaching award, and he received the 2020 Charles J. and Mary Pat Himmelberg Graduate Student Award.

His research area is in the existence, stability and dynamics of nonlinear waves in partial differential equations arising from applications. He has three published papers with his adviser, Mathew Johnson, associate professor of mathematics.

The Bernstein Award for Future Faculty was established in 2014 in honor of Dan Bernstein, who served as CTE’s director for 12 years. The award is funded through KU Endowment.