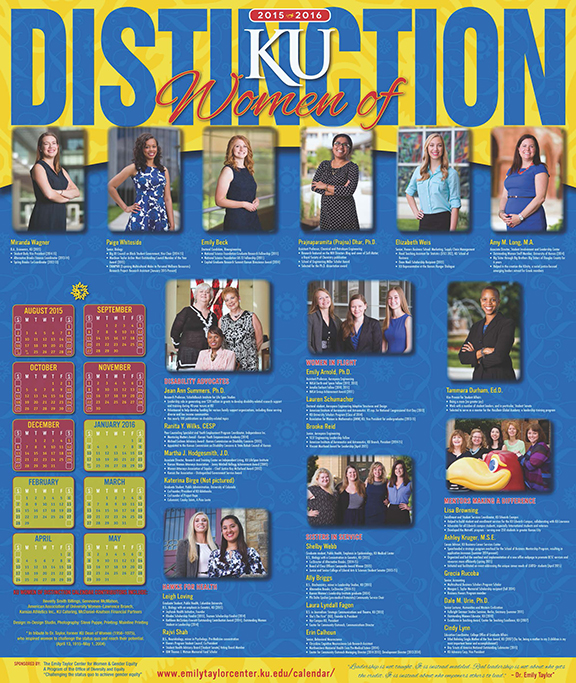 LAWRENCE — Twenty-five women with ties to the University of Kansas are featured in the 2015-2016 Women of Distinction calendar. The Emily Taylor Resource Center for Women & Gender Equity, which produces the poster-sized calendar, will host a reception to honor the women and their achievements Monday, Aug. 31.

The women represent KU students, faculty, staff, administrators and alumnae who have distinguished achievements in their efforts at the university or in their community.

“It is so important to recognize and celebrate women's contributions to our campus and the world beyond,” said Kathy Rose-Mockry, director of the Emily Taylor center. “This year, we honor accomplished women who excel in their disciplines while serving as role models and mentors to inspire others to break barriers and reach for the stars.”

Nine current students, seven alumnae and nine faculty and staff are featured on the calendar. Five areas of service and distinction also receive special attention through the calendar: Disability advocates, Hawks for health, women in flight, mentors making a difference and sisters in service.

A reception to acknowledge this year’s featured women and their contributions will be from 4 p.m. to 5:30 p.m. Monday, Aug. 31, in the ballroom of the Kansas Union. The public is welcome to attend.

The Women of Distinction calendars are free, although donations are accepted. They are available at several locations, including the KU Bookstore, Jayhawk Ink and the Emily Taylor Center, 4024 Wescoe Hall.

Individuals featured on the 2015-2016 Women of Distinction Calendar and selected achievements and honors:

Tammara Durham, Ed. D. Vice provost for student affairs and interim vice provost of undergraduate studies
Leadership in in enhancing campus response to student needs
Work with student leaders, and in particular, Student Senate
Selected to serve as a mentor for the Hesselbein Global Academy, a leadership training program