LAWRENCE — A chemist is the most recent University of Kansas faculty member to be named to the American Academy of Arts & Sciences. 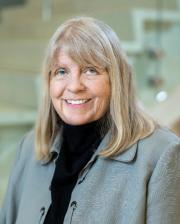 Kristin Bowman-James, University Distinguished Professor of Chemistry and director of Kansas NSF EPSCoR, is among the more than 250 individuals elected to the academy in 2021. The newly elected members will sign the Book of Members, which includes the signatures of Martin Luther King Jr., Margaret Mead, Alexander Hamilton and Benjamin Franklin, among others.

“It is an incredible honor to be elected to the American Academy of Arts & Sciences,” Bowman-James said. “To be in the company of so many great intellects is mind-boggling. I have had a particular fondness for Ben Franklin, one of the founders, whose scientific exploits catalyzed my interest in pursuing a career as a scientist when I was just 7.”

Bowman-James joined KU's chemistry department in 1975 after earning a bachelor's degree and doctorate from Temple University and a postdoctoral research fellowship at The Ohio State University.

Her research involves the strategic design of organized molecular frameworks as selective receptors for anions, as well as potential ligands for transition metal ions — work with the potential to meet challenges like nuclear waste site cleanup and depletion of the world’s available phosphorus reserves.

Through the Kansas National Science Foundation’s Established Program to Stimulate Competitive Research (NSF EPSCoR), which Bowman-James directs, she helped bring as much as $20 million over five years in federal research funds to Kansas through NSF’s Research Infrastructure Improvement (RII) awards.

“This is a tremendous and well-deserved honor for Dr. Bowman-James,” said John Colombo, interim dean of the College of Arts & Sciences. “I’ve had the great pleasure of working with her over the years in my positions with the Office of Research and the College. Her work represents a great example of basic research with clear and meaningful relevance to real-world impacts. She has always been a role model for researchers and scholars here at KU, and I’m pleased to offer my congratulations on this achievement.”

Founded in 1780, the academy honors exceptional scholars, leaders, artists and innovators and engages them in sharing knowledge and addressing challenges facing the world.